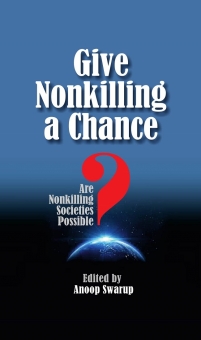 By Edited by Anoop Swarup

'Are Nonkilling societies possible?' Dr Anoop Swarup answers this seemingly difficult question with an unequivocal 'yes' and a stark statistical revelation that only an insignificant number of humans living in a society have killed their own brethren in contrast to the actions of state and non-state actors! In this book, Dr Swarup introduces readers to the concept of 'affirmative nonkilling', a term coined by him which rests on the premise that 'wars begin in the minds of men and it is in the minds of men that the defences of peace must be constructed'. Give Nonkilling a Chance is a treasure trove of scholarly works from eminent individuals who during the last decade endeavoured to promote a world that is free of killings. It is a veritable follow-up companion to commemorate the historic 'Non-Killing Global Political Science' thesis by the late Professor Glenn Durland Paige, the founding Chair of the Center for Global Nonkilling.

Dr Anoop Swarup has nearly 40 years of experience in diverse roles as a poet, author, speaker, peace activist, life scientist, futurist, social entrepreneur, civil servant and educationist. He is the founding Vice Chancellor of Jagran Lakecity University, Bhopal and a Fellow of Royal Society of Arts (FRSA, London). Former Vice Chancellor of Shobhit University and a GEO reviewer with UNEP, Dr Swarup is a visiting Professor/Resource Person with various universities in India and abroad. He has also held many key positions in the Government of India and the UN. He is the Chairman of Center for Global Nonkilling (CGNK), Hawaii (2015), Founder Chair of 'Global Knowledge Alliance' (GKA) Australia (2014) and Founding Trustee of Indian Council of Gandhian Studies (ICGS). Dr Swarup is the recipient of Hiroshima Peace Award (2016), Presidential Award on Republic Day of India (2003), and Amrita Devi Vishnoi Medal (2013).