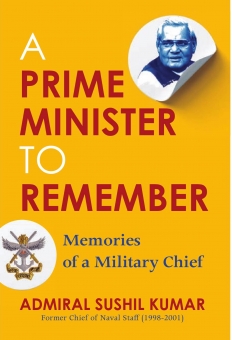 A Prime Minister to Remember: Memories of a Military Chief (Hardcover)

"‘Old Soldiers never die...’ are the lyrics from a wartime ballad and this will perhaps be the lasting memory for several military personnel who served with the late Prime Minister of India, Atal Bihari Vajpayee.

His legendary greatness was showcased in the accolades he received on his demise in August 2018. These were glowing tributes from across the political spectrum of India. However, what remained unsaid was the huge impact that Prime Minister Vajpayee had on the armed forces of India.

That void has now been filled by this authentic first-hand account, by a Military Chief who served with Prime Minister Vajpayee from 1998 to 2001.

Admiral Sushil Kumar was Chief of the Indian Navy during the Kargil War and Chairman of the Chiefs of Staff Committee when Operation Parakram was launched after the terror attack on the Indian Parliament."

"ADMIRAL SUSHIL KUMAR was Chief of the Indian Navy and was concurrently appointed Chairman of the Chiefs of Staff Committee of the armed forces. The Admiral served with Prime Minister Atal Bihari Vajpayee from 1998 to 2001 during challenging times that included the Kargil War, hijacking of IC 814 and Operation Parakram following the terror attack on the Parliament.

The Admiral remains an ardent admirer of the late Prime Minister Vajpayee.

Apart from his distinguished career in the Indian Navy, the Admiral has been an accomplished horseman and his passion for polo remained even as he pursued his professional career in the navy. As a sailor, he has the rare distinction of having played polo on the international circuit.