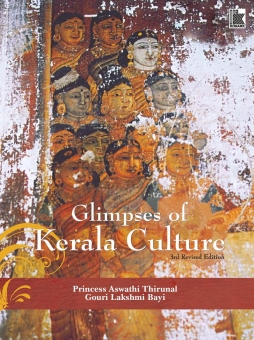 Culture is an important component in the making of a society. Seldom are efforts made to interpret culture in the context of history and give it a fresh perspective. Glimpses of Kerala Culture, by taking the less trodden path, urges the reader to go deeper and explore the various cultural facets that Kerala has to offer the world.

The book is divided into three parts, dealing with the Dravidian or the Non-Vedic Stream of Civilisation, the Vedic or the Aryan Stream, and the Colours of the 'United Stream'. It talks about an aspect of Kerala history that is missing from the public discourse. It traces the origins of various art forms and helps the reader to understand the syncretic nature of Kerala's culture. It also gives a glimpse into the some of the important principles of Hinduism and how it has helped shape the way of life.

By making the colours of Kerala come alive in the vibrant mosaic of Indian heritage, the book makes the reader establish an easy communion with the state and its people.

Princess Aswathi Thirunal Gouri Lakshmi Bayi, known for her learning and scholarship, has authored several publications and has presented erudite papers at national and international conferences. Her poems and articles have appeared in leading newspapers and journals in India and abroad. She has written both in English and Malayalam.

Her major works in English include, Thirumulkazhcha and The Down (anthologies of poems), Sree Padmanabha Swamy Temple, Kerala Temple Architecture, Thulasi Garland (about 33 Travancore temples) and The Mighty Indian Experience. Her books in Malayalam include Malayalame Mappu and Budha Darshanam. She has also translated Sabarimala Sree Ayyappa Charitham from English to Malayalam and provided the English text for Raja Ravi Varma, The Painter Prince 1848-1906.

You can buy the book on Amazon India Flipkart