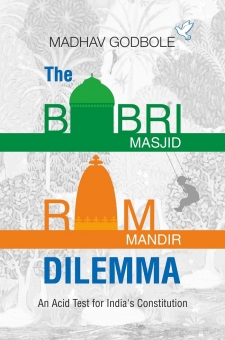 The Babri Masjid–Ram Mandir Dilemma: An Acid Test for India’s Constitution forcefully asserts that the Babri Masjid could have been saved by the timely intervention of Rajiv Gandhi in the initial years before political positions hardened, V.P. Singh remaining firm after promulgating an ordinance vesting the specified area in and around the Babri Masjid in the Central government, and, P.V. Narasimha Rao taking timely action when the Babri Masjid was under serious threat. Historical wrongs must be addressed rationally and in a way befitting the modern age and times. Because places of worship of Hindus were destroyed in the past does not mean the same barbarity should be practiced now in respect of Muslim or Christian places of worship. Neither Hindus nor Muslims are prepared to give up the baggage of the past. Intermixing religion and politics has added fuel to the fire. India cannot be at peace till an amicable solution is found to the RJB-BM dispute. The author suggests such a solution based on equal respect for the sentiments of both communities.

Written by the former Union Home Secretary and Secretary, Justice, who was closely associated with the events when the Babri Masjid was demolished, the book provides rare insights through its comprehensive and detached analysis. It throws light on how all major Constitutional bodies failed in discharging their responsibilities. After the 2019 Lok Sabha elections, India is being perceived by some as a Hindu country. Strengthening secularism is its foremost challenge.

The book is a must-read for leaders of public opinion, parliamentarians, jurists, media stalwarts, professionals, administrators, and the young generation. For, what is at stake is India's future.

After the demolition of the Babri Masjid, Madhav Godbole took voluntary retirement from the Indian Administrative Service in March 1993 when he was Union Home Secretary & Secretary, Justice. Earlier, he was Secretary, Petroleum and Natural Gas, and Secretary, Urban Development in Government of India. He also worked as Chairman, Maharashtra State Electricity Board, and Principal Finance Secretary in Government of Maharashtra.

Godbole has written 23 books on public policy issues of which 13 are in English. The Hindi translation of his book, Secularism: India at a Crossroads, was published in 2018. He is now researching for his next book, India's Quasi-Federalism: Fault lines, Challenges and Opportunities.

Godbole has written over 450 articles in leading newspapers, journals and periodicals. He wrote a weekly column for two years in Marathi daily Loksatta. A collection of his articles, India's Governance: An Incisive Commentary on Some Burning Issues, is under print.