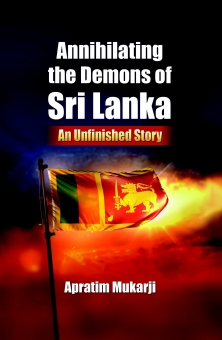 Annihilating the Demons of Sri Lanka: An Unfinished Story

Born of nearly three decades of closely watching the bewitching island nation of Sri Lanka, this book has been written in the 10th year of peace after a 30-year-long brutal civil war had ended, but one which had torn the country apart in the process. This relatively long period of peace should have brought about substantive dividends of Reconciliation and reconstruction but, regrettably, it has not.

This analysis had started on a note of optimism, which indeed was the situation. But what it finally depicts instead is an antithesis of that initial premise. The analysis is being presented with the conviction that it is a truthful account, backed by proven findings and time-tested evidence of Sri Lanka's lost opportunities to rise to the occasion. It concludes that every ethnic community is responsible for today's disappointing and debilitating situation, though the majority Buddhist-Sinhalese community justifiably stands accused of having played the most divisive role in this dark history of racialism. Apart from the focus on the contemporary history, the developments since the early 1930s which had contributed to the shaping of the subsequent history, has been dealt with in detail.

The concluding prospect of the next two years may appear to be too dark for comfort, but if the current political dispensation, the Rainbow Coalition, carries out its promises, things might just start looking up for this beautiful country.

Apratim Mukarji became a journalist in 1968, specialising in political and economic journalism. He was posted as the foreign correspondent of Hindustan Times to Sri Lanka in 1990 and spent six years covering the civil war. Even after his return home, Sri Lanka continued to engage him, drawing him back time and again. His abiding interest in that country has resulted in him publishing two books, The War in Sri Lanka –Unending Conflicts? (2000) and Sri Lanka: A Dangerous Interlude (2005). He also covered the civil war in Afghanistan in 1996, after which he wrote the book, Afghanistan: From Terror to Freedom (2003). He researched on the spread of political Islam in the Central Asian Republics as a Senior Fellow, Indian Council of Social Science Research, New Delhi (2000-2002). He co-edited Assertive Democracy: Transition in Yugoslavia (2001) after covering the Western attack on the country. His other area of interest and study is the geopolitics of the Indian Ocean Region.