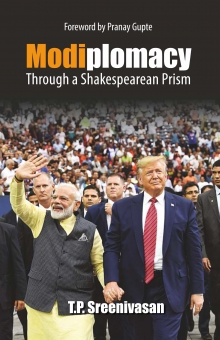 Modiplomacy: Through a Shakespearean Prism (Hardcover)

Modiplomacy – Through a Shakespearean Prism is a unique work of contemporary history by a writer, who has a background of learning and teaching English literature and a wealth of experience of diplomacy in the Indian Foreign Service for 37 years. As he watched the unfolding of Narendra Modi's brand of diplomacy for five years, he saw in it the changing fortunes of a Shakespearean hero, whose central role in the play is dictated not only by his sterling qualities, but also by his tragic flaws and circumstances which go beyond his control.

Based on his columns published in the leading newspapers and web portals in real time, the author has created a new genre of political commentary, making a blend of instant assessments as the events occurred and considered observations as they resonated in India and abroad. To get a view of a Prime Minister's actions and reactions as he set about shaping the foreign policy of a new India and an analysis of their repercussions is a rare experience in narration and appreciation of the man and his times. Objectivity, without a trace of prejudice or hero worship, is the hallmark of the work.

The fascinating story of Modiplomacy of five years is told here with the sensitivity and objectivity of an author, who is rooted in literature and grown in the world of diplomacy around the globe.

T.P. Sreenivasan, former Ambassador, returned to Kerala after serving with distinction at crucial posts around the globe (Tokyo, Thimphu, Moscow, New Delhi [twice], New York [twice], Yangon, Suva, Nairobi, Washington and Vienna), but remained at the centre of global conversations on international affairs through his six books, hundreds of articles and frequent lectures in India and abroad. He was on the National Security Advisory Board, served as a Senior Fellow at the Brookings Institution and also as the Vice Chairman of the Kerala State Higher Education Council. He contributes to national and international journals and teaches at various universities. He has received several awards and prizes before and after his diplomatic career, spanning 37 years. He is presently the Founder Director General of a foreign policy Think Tank, the Kerala International Centre, Thiruvananthapuram, Kerala.

The author has been following Prime Minister Narendra Modi's foreign policy closely and writing regularly on it. The book carries the stamp of a seasoned diplomat and a gifted writer and scholar. His deep study of English Literature as a student and teacher is also evident in his writings.