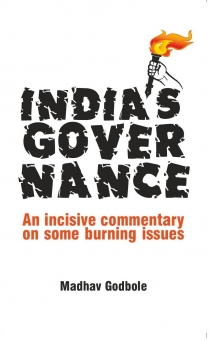 INDIA’S GOVERNANCE: An incisive commentary on some burning issues (Paperback)

Politicisation and communalization of every issue has become the bane of public life in India. In such an environment, writing fearlessly, objectively and apolitically is neither easy nor common, but this is precisely what the author has done in his incisive commentaries on some of the burning issues of the day. This collection of 37 select essays, written between 2006 and 2018, brings out some of the prime concerns facing India. As for the solutions, the wheel does not need to be reinvented. What is required is the political and administrative will to put the wheel in motion. The writings bring into focus the importance of safeguarding secularism if India is to remain at peace with herself; strengthening and empowering institutions for the sustenance of democracy; and meeting the menacing challenges to the rule of law in the country. Good governance must be made a fundamental right of every citizen. In the increasingly globalised and fiercely competitive world, India cannot afford to be caught off guard on any front.

Dr Madhav Godbole, an eminent civil servant with 34 years of distinguished service, took voluntary retirement in March 1993 when he was Union Home Secretary and Secretary, Justice. He has also served as Secretary, Ministry of Petroleum and Natural Gas and Ministry of Urban Development, Government of India. During his tenure with the Government of Maharashtra, he worked as Principal Finance Secretary and Chairman of the State Electricity Board. He was also chairman of several government committees, including Enron power project and management of India's international borders.

He has written 25 books on public policy issues of which 14 are in English. He has also written over 450 articles in leading newspapers, journals and periodicals. He wrote a weekly column for two years in leading Marathi daily Loksatta. Godbole and his wife Sujata live in Pune.