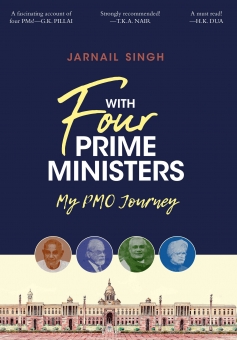 The curiosity around what really goes on in the Prime Minister’s Office (PMO) has refused to die down since its inception in 1947. This book, through a bureaucrat’s journey of eight years (August 1996 to August 2004) under four prime ministers, aims to give the readers a glimpse into the most powerful office in India.

Jarnail Singh’s personal narrative is pieced together from the journal that he maintained during his years in service. It gives a detailed account of the factors involved in the functioning of the PMO while also reflecting the individual contribution of each prime minister to the country.

The eight years traced in the book stand out for economic development and opening up of many sectors of the Indian economy. Listing the major initiatives taken during the period, Jarnail Singh terms the A.B. Vajpayee period from March 1998 to May 2004 as a ‘Golden Era’ for infrastructure and economic development in the history of India.

The other key highlight of the book is the way Jarnail Singh has traced the policy continuation or otherwise under the four prime ministers, especially in major infrastructure development sectors, Jammu and Kashmir and the NE states. He also discusses some of the missteps taken during these years.

Written in a lucid manner, Jarnail Singh brings a sharp and personal insight into the processes that guide the administration of the world’s largest democracy.

As Joint Secretary, Jarnail Singh served four Prime Ministers—H.D. Deve Gowda, I.K. Gujral, Atal Bihari Vajpayee and Dr Manmohan Singh—and handled matters relating to various ministries and states. His eight-year-stint in the PMO is among the longest by any officer. It was during these years that major economic development initiatives were taken in Power, Petroleum and Natural Gas, National Highways and Road Communications, Telecommunications, Civil Aviation, different social sectors and for development of the North-East.

Jarnail Singh received the PM’s Award for Excellence in Public Administration for the year 2007-08 for the initiatives taken to improve the governance in Manipur. He has earlier written a book My Tryst with Manipur about his 23 years of public service experiences in Manipur.