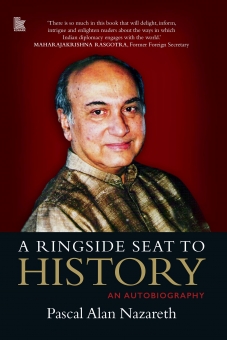 A RINGSIDE SEAT TO HISTORY: AN AUTOBIOGRAPHY (Hardcover)

This is the riveting autobiography of a timid, small-town youth, pressured by his father to aspire for the coveted Indian Administrative Service (IAS), but is selected for the Indian Foreign Service (IFS), and thus witnesses historic events at close proximity in various parts of the world and plays a role in some of them.

He learns of the Dalai Lama's crossing the Tibetan border into India, in Prime Minister Jawaharlal Nehru's office; witnesses a Japanese politician being assassinated in Tokyo; handles the aftermath of military coups and bloody executions of Heads of State in Ghana and Liberia; relentlessly pursues a fraudulent and well-connected NRI shipping magnate in the US and Costa Rica and ensures he is repatriated to India; crosses swords with nefarious arms dealers in London; makes major economic gains for India in West Africa and Latin America and makes a vital contribution in projecting India as a 'Cultural Superpower'.

His post-retirement years have been dedicated to reviving Gandhian ideals, promoting friendship and peace with Pakistan and lecturing on 'Blue Waters'. Struck with two major personal tragedies he sublimates them into socially impactful projects and spiritual self-transformation.

Since retirement in May 1994, he has lectured at many prestigious institutions such as Universities of Bengaluru, Banaras, Delhi, Stanford, Yale, Columbia, Heidelberg, Uppsala and Peking.

His Gandhi's Outstanding Leadership book has come out in 12 Indian and 23 foreign languages, including Arabic, French, Mandarin, Russian and Spanish. Former Soviet President Mikhail Gorbachev has written the Foreword for 12 of its foreign language editions.

In 2007, Nazareth was presented the U Thant Peace Award for his 'Life Time of World Service'. Among its previous recipients are Pope John Paul II, Mother Teresa, the Dalai Lama, Mikhail Gorbachev, Nelson Mandela and Desmond Tutu.

He has delivered International Day of Non-Violence keynote addresses at the UN in New York in 2012 and UN Library in Geneva in 2017.

His Gandhi: The Soul Force Warrior book was published in October 2018. Its Spanish edition has come out already. Its French, Mandarin, Myanmarese, Polish and Serbian editions are on the anvil.