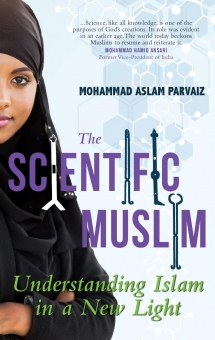 The Scientific Muslim: Understanding Islam in a New Light (Paperback)

Majority of Muslims read the Qur’an without understanding it, as Arabic is not their mother tongue. For centuries, they have been following (blindly) what is being passed on to them by their parents, peers and religious guides, without applying their minds or knowledge to analyse the message. This is against the teachings of Allah who asks believers not to behave like the deaf and dumb, but to judge everything according to logic and reason (Al-Furqan 25:73).

Dr Mohammad Aslam Parvaiz has taken up many misconceptions of the Muslim society in this book, and urges readers to look to the Qu’ran for revelations about science. He has a scientific understanding of the Qur’an and attempts to understand the message of the holy book by deriving the meaning of words through their roots and usage at different places and contexts, the latter being described in the Qur’an as Tasreef-e-Aayat or diversification of verses.

Dr Mohammad Aslam Parvaiz, who has a doctorate in plant physiology from Aligarh Muslim University, was the Vice-Chancellor of Maulana Azad National Urdu University, Hyderabad. His research, teaching and administrative experience is spread over more than 35 years. He is a science communicator and has five books and more than 350 popular science write-ups to his credit. Dr Parvaiz is founder and editor of Urdu Science, India’s first and only popular science and environment monthly magazine published in Urdu.

He also heads the Islamic Foundation for Science and Environment (India). He has been invited to deliver lectures by universities like Harvard, Yale and Toronto, besides many other institutions and organisations. He has been part of a number of prestigious fellowships and programmes in the United States.