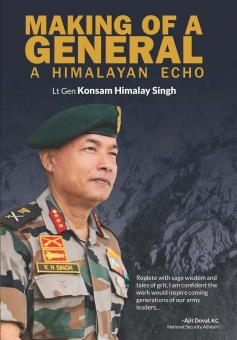 MAKING OF A GENERAL: A HIMALAYAN ECHO (Hardcover)

Making of a General is about the unique journey of a village boy from a small hamlet of Manipur and his ascendance to become the first Three Star General of the Indian Army from North East India.

The book is also about Manipur, the 'Land of Jewels', a former princely state, where hills embrace dales in timeless beauty, and history takes wings evoking a fairytale land of giant serpents, and about monarchs who ruled like colossus. It is also the territory of Ima (the mother), whose sheltering presence reverberates across the vales, where doe-eyed damsels dance mimicking the graceful movements of Sangai, the prancing deer, and turbaned drummers do cartwheels to symbolise the Vaishnava belief of ceaseless continuity. The author has given his perspective on nation-building enterprise in Manipur in the backdrop of multitude of issues, including the ethnic conflicts in the region.

The book takes the reader through the myriad places traversed by the author during his eventful career in the army. The chapter on the Kargil War and the author's tour of duty in the Siachen Glacier, 'the highest battlefield in the world', gives a vivid portrayal of happenings that bring out the deep sense of pride, honour and valour of the men he commanded. The book effectively brings to light the intrinsic challenges faced by those holding superior command posts in one of the most formidable forces in the world. With its incisive and frank writing, the book would prove to be a manual as well as a valuable reference material for the future generals of a ‘Never say Die’ army.

LT GEN. (DR) KONSAM HIMALAY SINGH (Retd) PVSM, UYSM, AVSM, YSM, was commissioned in the Rajput Regiment in June 1978. He is the first Lieutenant General of the Indian Army from the North Eastern Region of India. He commanded his unit in Turtuk Sector and Siachen Glacier during the 1999 Kargil War and was awarded the Yudh Seva Medal for his role in the conflict. He has also served as Division and Corps Commander in Jammu and Kashmir in Counter-Insurgency and in the Line of Control environment.

After serving nearly 40 years in the Indian Army, he went back to his home state Manipur to serve the people. He was the Chairman of the Manipur Public Service Commission. He is a member of the Consultative Group of the State Government on the Naga talks. He is presently an Advisor and a Visiting Scholar in the Central University of Manipur in the Dept of National Security Studies.

He has authored a book titled Romancing the LOC, besides writing regularly and speaking at various national and international seminars on security matters.