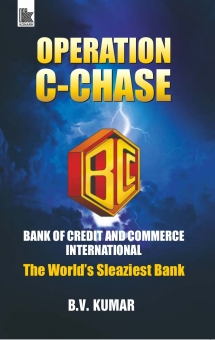 The Bank of Credit and Commerce International (BCCI)—the world's sleaziest bank—had a unique criminal structure and was involved in international financial crime and espionage on a massive and global scale. It systematically bribed world leaders and prominent political figures in most of the 72 countries in which it operated. BCCI developed a strategy to infiltrate the US banking system bypassing regulatory barriers that were designed to keep it out. Due to the failure of the regulatory authorities, thousands of depositors and creditors lost millions of dollars.

BCCI was actively involved in laundering billions of dollars of drug generated money for the Medellin Cartel, ruthlessly controlled by the Columbian mob led by Pablo Escobar Gaviria and Jorge Luis Ochoa Vasquez, which supplied the majority of cocaine entering the US and Europe. As a result of 'Operation C-Chase', clear evidence emerged to show the nexus between terrorist organizations and BCCI.

B. V. KUMAR joined the Indian Revenue Service in 1958 and held various key positions such as Director General, Revenue Intelligence; Director General, Narcotics Control Bureau; Director General, Economic Intelligence Bureau and Member, Central Board of Excise and Customs amongst others in his 35 years of service. During his tenure, many syndicates involved in organised economic crime that operated transnationally were neutralised. The Illustrated Weekly of India had dedicated its front cover (October 11-17, 1987 issue) to Kumar and described him as 'Super Sleuth'. Kumar has represented India at various international conferences, including Interpol meetings held between 1985 and 1988. Post retirement, he has been a visiting lecturer at various institutions. He has authored five books and has several research publications to his credit. His recent work was DRI and The Dons.