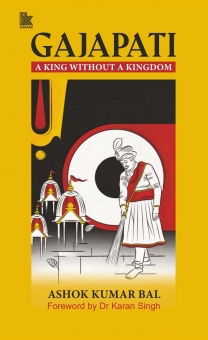 GAJAPATI: A KING WITHOUT A KINGDOM

THE GAJAPATI IS AN INSTITUTION OF seminal signicance in Odisha. The dual status of the Gajapati, both as a king and a servant (Adyasebak), makes him distinctly unique.

Gajapati kings have acted as the vassals or deputies, or the agents of Lord Jagannath, who is held as the Supreme Sovereign. This foundational doctrine was an innovative experiment in statecraft used by the Gajapatis to secure and sustain the support of the people for expansion and consolidation of the kingdom.

The Odishan kingdom, at its pinnacle of glory during the reign of Kapilendra Deb (AD 1435-1467), stretched from the river Ganges to the Cauvery River but witnessed decline since the advent of the Afghans (1568), followed by the Marathas (1751) and the British (1803), nally leading to complete dispossession of territory and making the Gajapati or the Raja of Puri, a king without a kingdom.

Apart from interesting historical facts, the book contains fascinating stories. There was one Gajapati king, a loyal devotee of Lord Jagannath, who converted to Islam; another Gajapati who adopted a son as heir but disowned him in favour of another adopted child, leading to a prolonged court case; one king was accused of murder and banished to the Andamans. The stories on attempts to protect the shrine from repeated invasions by Muslim rulers and shifting the revered deities to different secret locations, and the narrative of the remarkable Queen Suryamani Patamahadei (the widow of Gajapati Birakeshari Deb II and mother of Dibyasingha Deb III [1859–1888]) are riveting.

The book elaborates on the Gajapati's gradual withdrawal from the role of royalty, even as his association with Lord Jagannath continues to thrive. This time-honoured ritual association with the Lord has placed the Gajapati in a position of high esteem and veneration among the people, for which he is reverentially known as Chalanti Vishnu (living embodiment of Lord Vishnu).

ASHOK KUMAR BAL, WITH A PASSION for delving deep into history and heritage, loves to unravel the stories related to people and places. His curiosity to explore the history of the Gajapatis arose from an unusual source—his horoscope made on a palm leaf after his birth by a village jyotish (astrologer). Inscribed on his horoscope, apart from the birth and zodiac details, was the regnal year (anka) and the name of the Gajapati Sri Sri Birakishore Deb, who was the King of Odisha when he was born. Later he learnt that it was a tradition which is followed till date to have the reference of the reigning Gajapati with the regnal year in the horoscope of a child. This fact, coupled with the evocative scene of the Chherapanhara ritual during the annual Rath Yatra where the Gajapati sweeps the chariot with a broom, fascinated him greatly and drove him to explore deeper into such a hallowed institution. The book is the outcome of his profound curiosity.

A bibliophile and travel enthusiast, Ashok Kumar Bal is an alumnus of the Delhi School of Economics and the Management Development Institute, Gurgaon. After a long career in the Indian Revenue Service, he moved to the private sector, and till recently he was the CEO of an Aditya Birla Group company. He is a frequent contributor to national newspapers, where he pens his thoughts on diverse issues related to economy, business and religion.

Ashok Kumar Bal can be reached at bal.ashok@outlook.com