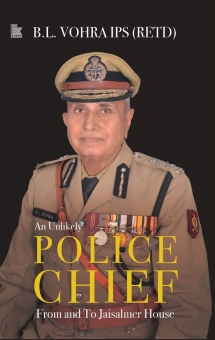 An Unlikely Police Chief: From and To Jaisalmer House

In this autobiography, the author narrates the story of his life as a police officer, starting from his childhood, to joining the coveted IPS, and finally to his retirement. As a refugee toddler from Pakistan, his early memories go back to living in a camp in Delhi (India) where his family had moved after the Partition of the subcontinent, until a small quarter was allotted to them. From there, this once mediocre student rose to become a three-star police chief in the elite Indian Police Service, after facing the toughest competition in the entrance examination for the civil services.

The author tells the story of the police in India from a ringside view and also a bit about India’s history itself during the last 75 years, the evolution of the political class and the internal challenges that the country faces. How incidents, events and human beings shaped his life takes us on his journey as a police officer and a family man. He also talks of his service to the nation with humility, pride and honour. With its insights, this is surely a motivational book for the younger generation.

B.L. VOHRA joined the Indian Police Service in 1967 and retired in 2004 as a Director General of Police. In his career, he has served in the Delhi Police, in Manipur, Tripura, Punjab and Jammu and Kashmir and in most Central Armed Police Forces. As DGP, Tripura, he successfully spearheaded the counter-insurgency operations against the decades-old insurgency. He was also Home Secretary of Manipur. He was awarded the President’s Police Medal for Distinguished Service, ‘Guru Samman’ by the Vice-President of India and many other medals and honours.

Vohra has written 13 books, contributes articles regularly for newspapers and appears in TV debates. These days he coaches civil services aspirants, conducts training workshops for corporates on soft skills and is the chairman of two reputed schools of Delhi, as well as the president of the NGO, ‘Vastradan’.